This summer, an SSF family along with friends took their children to teach at a SSF funded school in a remote hilly area named Champawat in Uttarakhand state in India. It was an exhilarating experience for all, the people from the hills were warm and welcoming, the weather was perfect during summer, and the air was pure and full of oxygen.  In spite of warnings and concerns from their families based on the news of lives lost due to cloud bursts, landslides, and heavy rains, with some adventure, the team made it to Champawat. The Small Steps volunteer team consisted of 8 people: Akhil Aggrawal, Tanuja Singh, Jayashree Varahan, Gaurav Misra and SSF youth volunteers: Simran Sadhwani, Avni Aggrawal, Shreya Kumar, Ananya Aggrawal. During their entire India trip, the SSF volunteers visited four Small Steps funded schools and took this opportunity to understand the accomplishments till date and evaluate project progress for future funding.
Each of the posts will go over their experience in more details.
Kulethi Village, Uttarakhand – July 3rd – July 6th
The adventure started in Kulethi village in Champawat town in Champawat district in Uttarakhand state. We visited Kulethi elementary and middle schools and LASRC centre situated in the same compound. We were welcomed by beautiful handmade hacienda flower bouquets, and later facilitated by the respected village elders and retired educationists. The pure Hindi speeches were full of spiritual and idealistic thoughts that were so moving and uplifting that Tanuja became emotional during her speech. Govindji, Sharmaji, and others welcomed us with Himalayan and Kumaun hospitality that symbolizes the environment where they live – simple living and high thinking.

Kulethi is a situated in a remote area of Champawat district in Uttarakhand. Since the short route Via Tanakpur was closed, we took the longer and extremely winding route which took ~7 hrs. Although the drive was beautiful but our friend, Jayashree Varhan, had extreme motion sickness. We were very relieved to reach Champawat and were very excited when we saw the cloud laden mountains from our hotel rooms. The hotel rooms and bathrooms were quite clean, and service was just dial #9 away, anytime for anything.
The children: Shreya Kumar, Avni Aggrawal, and Simran Sadhwani have been preparing course materials for the past three (3) weeks to teach mainly Conversational English and Science to the kids.

There were two batches run simultaneously of approx 25 kids each. One batch consisted of 7and 8th graders and was being taught by Avni, Simran, and Shreya. We had brought candies, and giveaways from US, but none were needed as the kids were highly motivated and engaged through out. The  teaching partnership among the girls:  Avni, Simran, Shreya was very collaborative and simply amazing!
The other batch consisted of 5th and 6th graders and was being taught by Jayashree, Ananya, and Tanuja. Interestingly, Nikita is a popular name, 3 Nikita’s among 12 girls in the class.The girls were very bright and one girl, Pushpa, got a pear from her home every day for each one of us. 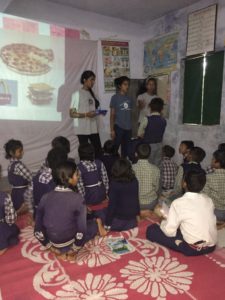 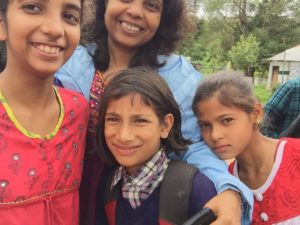 Tanuja spent two days talking to all the teachers and principals of the elementary and middle schools, asking them questions, and understanding all the preparatory work, and practice tests they do to prepare the kids for Navodaya exam. Fortunately, The Jawahar Novodaya’s (national-level) results came out on the 2nd day and 3 kids got selected from Kulethi elementary schools. One of the girls was also selected in the Rajiv Navodaya (state-level). Congratulations to all the kids whose future in now secured once they join Navodaya and Kudos to the team who worked hard to get them selected for this coveted honor in the state. In fact, the elementary school principal showed me the beautiful and huge Navodaya bldg for Champawat district, which is not very far from the Kulethi. Everyone in the school was also very happy for Aaganwadi teacher, who is a widow, and whose son got selected in the Navodaya program.
Our departure day was also very eventful, with wonderful speeches, heartfelt messages, hopes, wishes to visit again, and several requests to continue the support that Small Steps provides. All the SSF volunteers were facilitated by certificates and gifts from HIMWATS for their teaching efforts We also received local press coverage in Amar Ujjala and Hindustan. Leaving the beautiful weather behind, and memories of living besides clouds, we left Kulethi via Tanakpur for Moradabad. On the way, due to a landslide, we had to stop for 30 mins, and the drive to Morabdad was short and very enjoyable as we caught glimpses of Nepal. 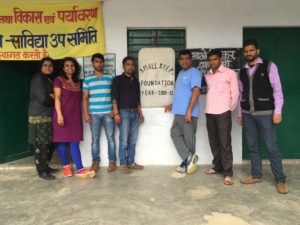 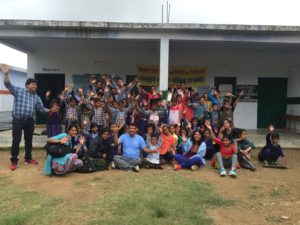 Moradabad, U.P – July 5th
It was Eid holiday when around noon, we were received by some students, principal Sunita Rani, and Hari Om Gupta ji with garlands, and flower petals splashes at ABBIC (Aagwanpur Banasthali Balika Inter College).
SSF have funded three labs: Chemistry, Physics, and Biology labs for the school. We also met the teachers whose salary we support for the school. It was amazing to see the principal’s enthusiasm for all sports – marathons, high jumps, and even Judo and Taekewando. It was also gratifying as she proudly showed us all the medals, numerous certificates, newspaper clippings, photographs of ABBIC children getting awards. Two girls by the same name were extreme athletes, one was a regional level Kho Kho player, and the other was a champion in several competitions and she finished half marathon in 48 mins and was a high jumper. It was pretty bare to see unplastered walls, rooms without finished floors, and solar panels missing the attachments as someone stole a lot of materials recently. Though this was more than what we expected because the last pics from this school were all classrooms were not plastered, just bare bricks. 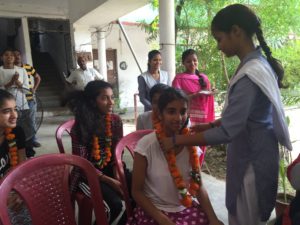 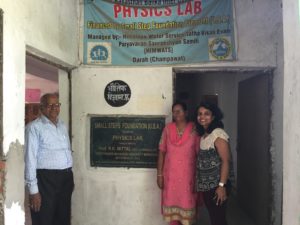 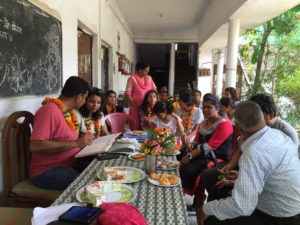 Surana Village, Rajasthan – July 9th
We left our home in Delhi at 4:30am with pillows and blankets, so that the kids could sleep in the car while we drove to Surana village, which is situated 50 km before Jaipur on the Delhi-Jaipur highway. Arrived in Surana on sweltering hot day at 9:20am, to a decent looking school building by village standards with all classes having 35 to 40 kids learning and sitting in the heat with only fan as a relief. Akhil and Avni set up the projector in one of the rooms to discuss the Science videos in Hindi that they had prepared for Champawat trip. Tanuja sat in the office talking to Bajrang Singh, the principal about Jawahar and Rajiv Navodaya programs, and looking at attendance registers and board mark sheets of kids. After understanding the demography of the students, they are mostly from the local tribes such as Gujjars, and mostly BPL (below poverty line). Also, ~75%-80% of the students in this school are from OBC, SC/ST, minority, and SBC groups and about 5% (35 kids) receive full RTE (Right To Education) reimbursement from the government. Looking at the 10th board mark sheets of all kids, we also found that other than 3 kids who had stellar performance, most of the kids scored average, this heightens the challenge to educate kids coming from this background and families, where first division(>60%) is a big achievement. 2 of the 3 kids had already left school to pursue their studies in Jaipur and aim for national competitions and we met the only girl who is still in the school who outperforms with no competition for more than 30% marks difference.
We wrapped up our visit discussing what to do next, such as implement a Navodaya program in the school given the demography, and following up an assessment process for computer training and education. Bajrang ji also offered us Gheva – an authentic rajsthani sweet made of sugar and milk and tea that we enjoyed. Overall, we were very happy to see the school progress in attendance (doubled in 6 yrs from ~300 to ~600) and the difference the principal has made in the school in the last seven years. We have advised him to expand his computer lab and where SSF can support in future. 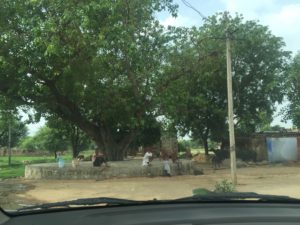 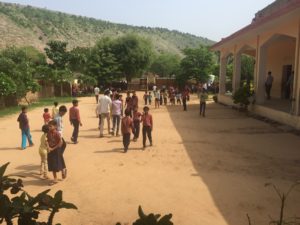 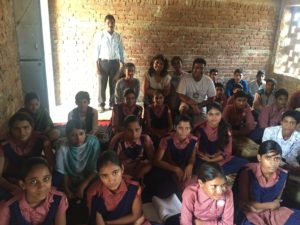 Finally, we also went to Bundelkhand area and discussed the possibility of SSF Classcloud in the Bundlekhand region. We had a great experience and learning in this visit.